Glenn Cockburn is the founder of Meridian Artists.  Along with the rest of the Meridian Artists team, Glenn currently represents a select roster of some of Canada’s most talented writers, directors and producers.

Glenn’s career started in 1996 when he began working as script reader for New Line Cinema and Innovative Artists Agency. From 1997 through 1999, Glenn worked as a Creative Executive at Templeton Production’s first look deal with New Line Cinema. In 1999, Glenn returned to Toronto and joined The Characters Talent Agency where he ran the Packaging Department.  Glenn also acted as Executive Producer on the feature film, Young People Fucking, which premiered at the Toronto International Film Festival in 2007 and became one of the most successful and highest grossing Canadian comedies of all time.

Glenn’s other professional activities include teaching the course, The Business of Film and Television, at Sheridan College as well as being a board member for the Humber Comedy program.  Glenn has a B.F.A. Honours in Film and Television Production, from York University and a M.B.A. from the Ivey School of Business. 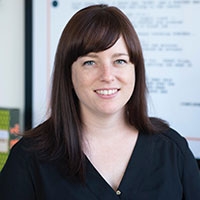 As a Toronto-based filmmaker and alumni of both the Canadian Film Centre and Toronto Metropolitan University's Image Arts program, Courtenay has actively worked in the film industry for 15 years in various roles on productions such as Spotlight, Pacific Rim, Robocop, and Being Erica.

She produced a number of well-traveled short films including Benjamin, Still, Life on Juniper, and Hit Men. Most recently she was an associate producer on Mean Dreams which had its premiere at the Directors’ Fortnight at Cannes. Courtenay joined the team as an Agent in 2016 and is currently the head of the key creative division. Conrad Sun joined Meridian Artists in 2014 as an associate.  Based in Los Angeles, Conrad devotes his efforts toward building the Los Angeles roster, and supporting all of Meridian's LA based clients for both staffing and development.

Additionally, Conrad works with the Toronto office to develop properties for the US market and prepare clients who plan to work in Los Angeles. After graduating with a Bachelor of Science Degree from the University of Alberta, Conrad started his entertainment career by founding a Calgary-based video production company in 2004.  Soon he took his passion for film producing and entrepreneurship to Los Angeles where he attained his Master's Degree from the Peter Stark Producing Program at the University of Southern California.

Since then, Conrad has gained experience working in content development at companies like Epix, Hasbro Studios, Gran Via Productions (Breaking Bad) and New Wave Entertainment.